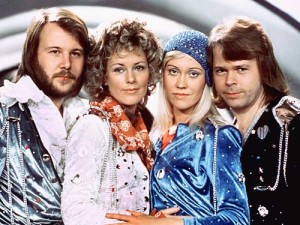 6th April 2014 will mark the 40th Anniversary of Abba winning the Eurovision Song Contest at the Dome in Brighton, England back in 1974. Such a significant year in pop history that we named our show after it!  We would like to say a big ‘Thank You For The Music’ to Abba for sharing their wonderful songs with the world.
Happy 40th Anniversary Abba!