We tried to find a name that was different to the rest. In a nutshell – Abba won The Eurovision Song Contest in 1974, so we called the show: 1974 ABBA TRIBUTE SHOW.

Is it true you all fronted Bjorn Again ?

Yes, this is actually how we all met. We had many fantastic years fronting the Bjorn Again show, travelling the world performing Abba’s music. Back in the 90’s it was the biggest tribute band in the world and we were performing at the height of its success. Here are a few highlights….
Tour support for The Spice Girls at Wembley Stadium, Rod Stewart, Sir Cliff Richard, Sting, Kylie Minogue, The Eagles, John Mayer, Cher, Shania Twain on her ‘Up’ tour.

A sell out concert at the Royal Albert Hall, London in 1998, which was filmed and released on DVD to critical acclaim. 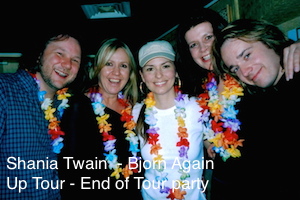 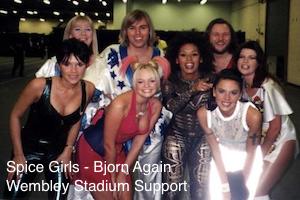 Have you met the real ABBA ? 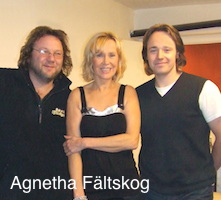 Yes, we have we actually met three of the original ABBA members (and even performed for one!).

Agnetha – Several years ago we performed at a TV awards show in Stockholm. It was quite surreal performing Abba’s music in front of one of the original members in the audience. In the middle of ‘Dancing Queen’, we looked down and there she was, dancing with her friends. Agnetha came back stage after our performance and said how she really enjoyed it, bringing back nice memories. She commented on how good Aileen and TJ’s vocals sounded and loved the girls’ choreography. 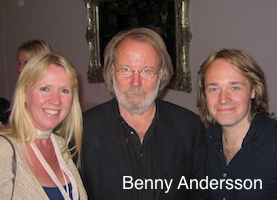 Benny & Bjorn – We met both Benny & Bjorn backstage at Hyde Park, London after a huge concert called ‘Thank You for the Music’. The concert was celebrating Abba’s music with various famous artistes such as Kylie Minogue and Chaka Khan who were performing songs with the BBC Concert Orchestra. We went backstage after the show and had a chat to both Benny and Bjorn. We knew we’d be there some time when the boys started talking about production and technology!

Anni-Frid – Our production manager met Frida on a flight to Switzerland a few years ago, but we haven’t yet had the pleasure.

Is it true you have worked with famous bands and artists?

Yes, we have enjoyed long successful careers in the music industry, and between us have extensively toured and recorded albums with many artists, such as: The Stereophonics, Sir Tom Jones, Blur, Johnny Hallyday, McFly, Gary Numan, Lisa Stansfield and Cat Stevens to name but a few.

Is it hard to re-create the ABBA sound ?

It’s very difficult to try and reproduce the original ABBA sound live in concert. The magic of ABBA’s music is wonderfully easy to listen to, but is in fact both musically and vocally very challenging. We have all been Abba fans from a young age, and still love performing their music after so many years. It’s very rare to hear an Abba tribute show that actually sounds like Abba, especially the singers. Having sang together for many years at the very top of the music industry, Aileen and TJ’s powerful voices blend perfectly together, which is a must to try and reproduce Agnetha and Frida’s vocal sound. We use some of the UK’s finest musicians on stage and have spent years refining the sounds and parts.

Can you tell us some highlights over the past few years?