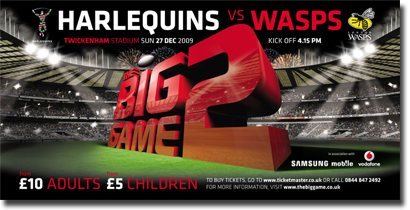 1974 joined X-Factor stars Olly Murs, Jamie Archer & Lucie Jones at one of Guinness Premiership’s most exciting events of the year,  ‘The Big Game 2’ which was held at Twickenham Stadium London, on 27th Dec 09.
1974 ‘kicked off’ the days action with a great performance in the middle of the pitch to a crowd of 80,000 people and joining them were the LV Love Girls, getting everyone in the party mood before the game with the Harlequins v Wasps began.

‘Many thanks to all for a great day…what a great game!’

Check out the gallery and media pages for memories of the day.